The TV shows House of Lies and House of Cards provide graphic lessons for proposal professionals. Both shows have characters that are determined to be game changers in their chosen field of work, and both have unbridled ambition to jump over their competition using any possible means. One wants to own his own agency and be the boss (Don Cheadle). The other wants to ultimately be President or at least the person who controls the office (Kevin Spacey).

An Open Letter to Our Customers 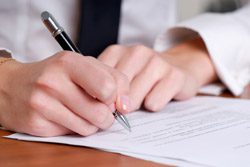 As the New Year starts, all of us here at OCI want to take this opportunity to thank you for your business.  We strive as hard as humanly possible to consistently provide excellent service to you.  If we make a mistake, we try to correct it as near to immediately as possible.

What Type of Proposal Market can we expect in 2014?

The question at top of all our minds is that asking, how much proposal business will we see in 2014?  In this article, I will attempt to answer this question.  The article is addressed primarily to OCI consultants.

It is no secret that calendar year 2014 was slower than usual.  The proposal market was slow enough that most consultants experienced abnormal amounts of time on the bench.  Business in 2013 was slower than in 2012 at all proposal consultant agencies known to OCI.  The volume of 2013 business at OCI was about 9% slower than in 2012.  As far as we know, business at all other proposal consultant agencies was farther down.  Figures we have heard in networking with significant competitors include business that was 14%, 17%, 25%, 35%, 40% and 50% lower in 2013 than it was in 2012.  A few consultants have left the industry, while others have worked some in areas other than proposal services to augment their income.